Thursday May 23rd, 2013
Today was Ryan's firsts post chemo visit with a PA. We were instructed that after he got out he would need a shot called Neulasta. Essentially the shot is supposed to spike the white blood cells to counteract the low white blood cell count that normally happen with chemo. We sat in the waiting room and the first thing we observed is how many older people were there. Shortly after we arrived we were told of the cost of the shot was $2,000 out of pocket the normal cost without insurance is $5,000-$7,000 (ouch). Ryan will receive one of these after every chemo treatment so far that's 4. We got taken back to the room and Ryan was complaining that he was not feeling so great. I immediately went through the cabinets to search for anything he could puke into. The PA came in and asked us some questions and discussed with us the plan of action. I immediately noticed that she kept using the word remission. I asked her why she kept saying remission instead of cured. When we found out that Ryan had lymphoma we kept hearing the word cured. She explained that the anaplastic part of the cancer makes it harder to treat and that the goal is to get him as close to remission as possible. She also kept saying his prognosis, I asked her what was his prognosis. I was told they cant give us one because its so rare its the first case anyone has seen within Banner network. Afterwards they came in to give Ryan his shot, not long after he received it he got sick. I grabbed the puke bucket from the cabinet just in time. I felt so awful but also glad it happened at the office because they were able to take him back to the chemo room and give him nausea meds. This medicine is given straight through the port and works for 72 hours. Ryan started feeling better and after resting all afternoon he invited his parents over for some company.

Friday May 24th, 2019
Today was the day we were supposed to leave for Zion. We have had the trip planned and paid for, for over a year and Ryan really didn't want to miss it. We asked the doctor and they had no problem with him going as long as we took precautions. We at last minute hoped in the car and raced straight to Tuchan theater to see little mermaid. We are finally reunited with our angel!! She kept hugging me and wouldn't let go of me it was amazing. We watched the play and the first half was so bad that I couldn't stop laughing. It was almost more of a comedy show then anything. Ryan handled it well but was very tired and weak. We went straight to the hotel and to bed.


Thank you for all the love and support. We have received an outpouring amount of support and love during this difficult time and we appreciate it so much. 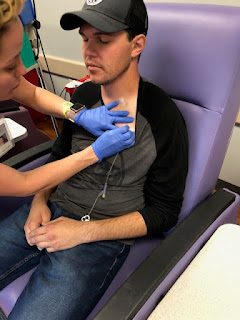 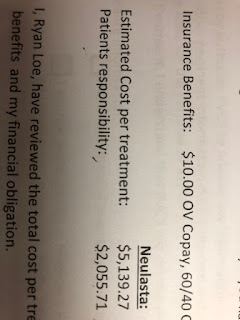