Journey to a diagnosis

It all started the week of April 22nd, 2019 when Ryan started complaining of some hip pain and just overall not feeling well. Saturday rolled around and the pain in his hip was so severe he could barely even walk. We went into the Emergency Room and they said everything looked normal and sent us on our way. We got home and I decided to look at Ryan's labs just to check everything out, and noticed that his lipase was elevated to 287. Immediately, I called the ER doctor and asked why we had not been told about the elevated numbers. She had completely missed the test result and asked us to come back. When we returned, they preformed further testing and said he had pancreatitis. However, they said he was handling it extremely well and we could go home. The next day Ryan started to run a fever so we returned to the ER. His lipase levels were elevated to 1,300 this time. But, once again since he was feeling so well, we were told we could just go  home.

Saturday May 4th, 2019 Ryan started to complain that the pain in his hip increasing and he was now feeling pain in his upper stomach. We decided to return to the ER again, his lipase level was now at 21,000. Immediately, they admitted him and started him on a liquid diet. They kept him for a few days to monitor his numbers and said he was doing well and that he would be able to leave in a few days. Ryan kept mentioning to the doctor that his hip was hurting and asked if they would please check it out. The doctor ordered an X-ray and it came back normal. They decided to do an abdominal CT scan and it showed his liver was filled with cysts. They couldn't give a reason as to why his liver had cysts, so they said to follow up with a primary doctor. He was doing well, just had a lot of pain so they discharged him and sent us on our way.

Sunday May 12th, 2019 We drove down to Vegas to spend Mother's Day with my grandma and my mom. My grandma also is suffering from cancer and was not doing well. That night Ryan was in so much pain, I told him let's just go to the hospital and get checked out since my mom was available to watch the baby. When we walked in, we told them that the pancreatitis felt worse and the hip pain was severe at this point. They did a CT abdominal scan and some blood work. The ER doctor told us that the CT looked fine and we just needed to wait for the blood work to come back. When we asked him about the hip pain and he told us that it was just ''constipation''. ARE YOU KIDDING ME ??!!! They got the labs back and said that his pancreas was still not doing well and that his liver enzymes were elevated. The ER doctor came in and let us know that they would be admitting him for further testing. After being admitted, the doctor ordered a CT scan of his chest and an X-ray of his hip. From those we found that he had lung nodules and a lesion on his hip that could be cancerous! I guess it wasn't constipation after all! We got the results of the CT on the chest that showed a mass in his chest, lung nodules, and lesions in his liver and pancreas. The doctor did a biopsy of the mass, and at this point we still didn't know if this could be cancerous. When the oncologist walked in, I just had a feeling it was not going to be good news. I told her ''hold on my husband is in the restroom he will be just a minute''. She responded and said ''That's okay we got his biopsy results, he has stage 4 lymphoma." I started to bawl. My husband walked out and she dropped the news the exact same way. The news was such a shock to us at this point, that we almost didn't believe it. We took a few minutes to absorb the information before we began calling all the family to tell them the devastating news . We were released and told to go straight to the hospital in Phoenix.

Monday May 20th, 2019 Today is the first day of chemo. We are praying for a healing and for strength for both Ryan and I. Thank you to all who have continued to pray for us!! 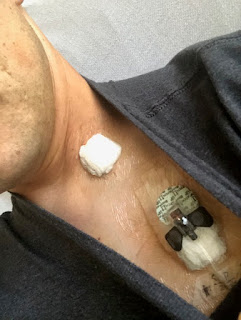 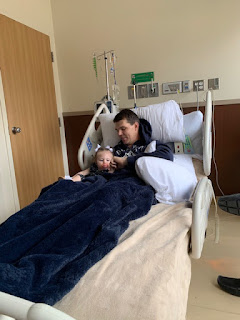